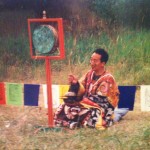 I found my first real teacher at the age 20 in a shamanistic tipi camp. I have no idea how a reincarnated Tibetan lama found his way out in the forest with us new age-types. I heard that years ago he had resigned from the exile government in India and with permission turned away from  monastic life. When he landed in Europe he spent his last money on a pair of jeans and got a job washing dishes in a restaurant. Back in the monastery he had never done a single day of manual labor. He would give Buddhist teachings in the basement of his house, and in the summer he would lead retreats from a primitive tipi in the forest.

“Tell me how to meditate,” I begged. He laughed, picked up a chain saw, handed me the axe and said: “Lets cut some wood first”. I heard from the others that he was a powerful clairvoyant but when I asked him about my future, he would kindly ask me to help him in the garden. When I wanted to learn how to recite the heart sutra in Sanskrit, he asked if I could do the cooking for his next retreat. I spent most of my free time washing up tea cups in his basement, cooking vegetarian food in the forest and laughing at lame Tibetan jokes over butter tea. When we eventually had some quiet time I would never miss the opportunity to ask him for advice. He would listen for a while and then fall asleep; chin dropped right onto his chest.

But I was in deep pain and my life made no sense. It just hurt! Never the less I was deeply convinced that I had come to this planet to learn something. That there had to be a spiritual path out there meant for me to walk. This horrible suffering must have been given to me for a reason. What was my dharma? What was the mission? I had no clue. I wanted to get over these annoying obstacles to my path. I was sure that my suffering was just “burning off bad karma” so that later, I could rise up and save the world. I wanted to find my path NOW, no time to spare. So i decided to become a Buddhist.

Can’t find your path? Have a look in the mirror. You already are the path. Don’t know your life’s true purpose? Not sure what is to be your sacred duty on the planet? It’s a no brainer: This very life is your dharma. Your the next step will be nothing but your path. This is it!