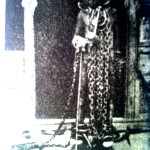 The Rebellious Heart of Hatha Yoga

My latest for rebelle Society. Yoga in india was once a dangerous and subversive practice spitting in the face of power. What happened?

To us modern westerners, the image of yoga posture practice is one of beauty, peace and good health. Yoga looks neat. A little too neat according to some. But not long ago, there was a time where yoga was an act of rebellion. Long before and up through the heyday of the British Empire, the western eye saw asana as a completely unacceptable and dangerous cultural phenomenon. Yoga was a bad ass practice.

Take for example hatha yoga-practicing Nath yogins of Bengal[1]. Born as caste underdogs these men found social mobility and freedom by combining austere asceticism with a powerful military organization. Wearing nothing but guns they pillaged their way forward. Some groups even managed to gain control over North Indian trade routes. Nudity, weapons and pillaging: A triple insult to the colonial rule of Britannia.

Ascetic mercenaries referred to as “yogis” or “jogis” were considered a force to be reckoned with for the British Government in Bengal. It took brute force and a long time to get these yogis to settle in villages and lay down their arms. But trouble persisted. Long after wandering naked and carrying a gun became a criminal offense, fakirs and yogis continued to disturb moral order by making public displays of “backward, uncivilized and dangerous” yoga posture practice[2]. The British were not amused!

So even though we yogis of today may associate our practice with peace, love and health, some of our yogic ancestors were pure guerrilla! Hatha yoga was operating behind the frontier of Victorian values, under the radar of imperial power. Yogis were flexible people on the move, people who could not easily be nailed down and fixated into the commercial circuit. Even if silenced by prohibition, immobilized by property rights and struck down by military power, hatha yoga remained rebellious. Practicing yoga postures was a way to spit in the face of cultural, economic, militant and moral oppression.

It could seem that the yoga revolution has come a long way since then. As we all know the British Empire shrunk back into to a few isolated islands while yoga posture practice expanded itself to a global, transnational phenomenon. The modern yoga boom is, to be sure, a living force to be reckoned with. A happy and life-giving practice spreading smiles across the planet. So far so good.

But what happened to the rebellious heart of hatha yoga? Where did it go?

Allow me to get gloomy for a few paragraphs; I promise to restore your faith in yoga revolutions towards the end.

At first glance, things do not look great for a wild yoga rebellion of our time. Try opening a mainstream yoga magazine. Not only is the neat image of modern transnational yoga culture a far cry from that of the untamed Nath yogins. Much worse, it seems that the yoga rebellion has backfired. What was once an opposition to power – the yogic body – is today becoming its instrument.

The body of yoga has become a commodity. In Yoga books, magazines, online and in yoga studios we get exposed to an image of a (predominantly white and female) body that seems to defy both the law of gravity and the flow of time. Gravity and time. Forces to be reckoned with – or maybe not? Today’s economic, cultural and moral elites have deployed new and creative means to fixate that which wants to move, to get that which refuses to fit back in line!

Fixating the yogic body of today into the commercial circuit does not happen with gun and imperial law. We have diet regimens and posture drills that would make trained soldiers cry and we are not afraid to use them in the struggle to keep our bodies in alignment with the dominant cultural ideal. And yoga posture practice has, ironically, become a favorite tool to get our asses in line. Also, yoga posture practice is today predominantly marketed as a tool to make you flexible, beautiful, fit, and forever young.

But the look is no longer enough. It has to come with that extra cool glow of the hip(pie) and bohemian. That is the yoga-body that we are now being taught to desire – and buy – by the aid of the intelligent elite of marketing experts. No guns needed.

And it does not stop with the body. As yoga posture practitioners we get bombarded with values, expert testimony, scientific knowledge and spiritual authority figures that will tell us what is true, good and healthy.

Is the yogic body then, nothing but a mute raw material for consumption? A passive, blank page to be inscribed by shifting moral orders and cultural ideals? A pulp to be shaped by power?

Yoga as a force of nature.

Yoga posture practice is still totally bad ass. Far behind the frontiers of commercialization, deep under the skin of all living bodies, the yoga rebellion is still breathing freely. If there is a yoga revolt alive today, it has no brand name, no logo, no sponsor, no PR employee, no merchandize, no charismatic leader and no moral elite.

Leslie Kaminoff has put it beautifully:

Yoga may have been discovered in India and taken up again in the West but it has not been invented by any one culture because “yoga is a force of nature”. Just as no one can claim to have “invented” electricity, no one can claim or own yoga.

I’d like to suggest that as a natural force, the heart of yoga remains rebellious. It does so because it has the power to hook up your mind with the intelligence of your body:

The force of nature which is currently keeping you alive. Right now you are breathing in a rhythm that supplies your body with exactly the volume of oxygen it needs. Right now your heart beats at just the right pace to supply your muscles and organs with blood. Your pupils are exactly the size they need to be so you read these words. Your body knows what it needs and how it can get it and it will protest violently if you go against its decisions. (Try to hold your breath as long as you can and see who wins). The intelligence of your body is a concrete, material force to be reckoned with[3].

You may have to sometimes turn away from clearly feeling the impulses of your body. You temporarily stick your fingers in your ears so as to not hear the silent language of sensation. But the wisdom of your physical body cannot be put out of service as long as you are alive. You will have to use brute force and a long time to get your body to lay down its arms. For your body knows very well how much it would really like to eat, who you really want to kiss, what postures will injure and which will nourish it, how long to work, when to sleep, when to surrender and when to fight. Your body can discriminate unflinchingly between loneliness and low blood sugar. It can clearly tell you the difference between pain and pleasure[4]. If you let it.

It is a privilege to be able to practice yoga. Because the physical postures bring the gift of turning up the volume when the forces of nature speak their intransigent body language. Asana allows you to tap directly into the intelligence of your body, a natural force that will not yield until you are dead or at least dying.

If you are sleep-deprived, yoga quickly reveals how tired you actually are. If you have pushed yourself beyond your capacity yoga will allow you to feel and respond to the pain of stress and overexertion. If you have buried unresolved issues in your life don’t be surprised if one day in dog pose, something old and ugly sticks its head out of the ground. If you are being aggressive with yourself or your loved ones a sensitive yoga practice can help you feel more clearly the impacts of your actions. And that refined sensitivity comes off your mat all by itself. Getting intimate with the body – with how you actually feel is the beginning of an organic response that may change things. A revolution coming not from external command, rules, dogma, cultural ideals or regimens, but from the wisdom of your very own body.

To say yes to your body sometimes involves saying no to the things that just are not OK. Maybe we do not need more people telling us what to do? Maybe yogis of today do not need sleeping pills, therapy sessions, diets, cosmetics, surgeons and life coaches? Perhaps the yogic body is still an alternative to becoming a domesticated, docile puppet-body? An alternative to serving the cultural ideals, moral regimes and commercial circuits imposed on us by those in power.

Asana is revolutionary. It is revolutionary because it is a somatic practice – a practice of the body. Its rebellious heart beats behind the front line of rationality, under the radar of cultural elitism. If yoga causes us to eat, sleep, talk, work or love differently it is because the preferences of our bodies have been felt and responded to because it taught us to distinguish between pain and pleasure. When our practice involves listening deeply to the life force within us, yoga allows us to love ourselves exactly as we are. To let go of any need for external authority.

It can come as no surprise, then, that there are still places in the world where teaching yoga can put you in jail. Because within yoga lurks a YES to the life force within you. And thereby also an unflinching NO to those who want to control what you buy, how you look, who you kiss, what you eat, what you vote or how you think.

Modern yoga may look neat and domesticated when pictured in magazines as just another tool for self-improvement. But as a somatic practice of deep self-enquiry it has not lost any of its rebellious potential. Getting intimate with the body may just plug your fingers into the power outlet of an uncontrollable natural force. Remembering the rebellion within yoga is to pay tribute to that which cannot be put in place, that which cannot be tamed, that which no external authority can silence. That force within you that only accepts freedom.